Ever heard of a ‘green flash’? It’s a phenomenon that occurs either at daybreak or sunset .. if you believe, at least!  There are different theories, but consider this one …  Sir Isaac Newton discovered that when light passes through one medium, such as air, into a denser medium, such as glass, it bends .. what we now know as refraction.  The same thing when you insert a stick into a pool of clear water and it appear to bend.

Using a prism and the principle of refraction, Newton bent ‘white’ sunlight, breaking it into its component colors – red, orange, yellow, green, indigo and violet – all of which have different frequencies or wavelengths, the same way your favorite radio stations on an FM dial have different frequencies.  Wavelengths for blue light are shorter than for red. Air molecules and other tiny particles in the atmosphere also do a good job of absorbing and re-emitting blue and violet light n random directions, while leaving the other colors relatively unaffected.  This scattering makes it look as if the blue is coming from everywhere in the sky at once.

As atmospheric particles grow in size, they grow less selective about the wave-lengths of light they scatter. By the time particles reach the size of water droplets in clouds, they scatter light at all wavelengths, and voila – white clouds! When the sun is low on the horizon, it’s light is traveling farther thought the atmosphere.  By the time the light reaches a viewer’s eye, the atmosphere has scattered most of the blue light, leaving colors at the red end of the spectrum.

Between blue and red lies the color green, which is where the ‘green flash’ comes in.  The green flash represents the instant at which sunlight hits the atmosphere at just the proper angle from the viewer’s perspective to break out (or refract) a bit of green. In order to see a green flash you need an unobstructed horizon like the Pacific Ocean (check – got that in Hawaii), and extremely clean air (check – can have that in Hawaii too), so there is little to scatter the green light.  The flashes occur either just before the first bit of sun peeks over the horizon at dawn, or after the last fragment vanishes at sunset.

I took this photo of a green flash in winter at the ‘tail-end’ of a whale watch cruise – it made a believer out of all that saw it! 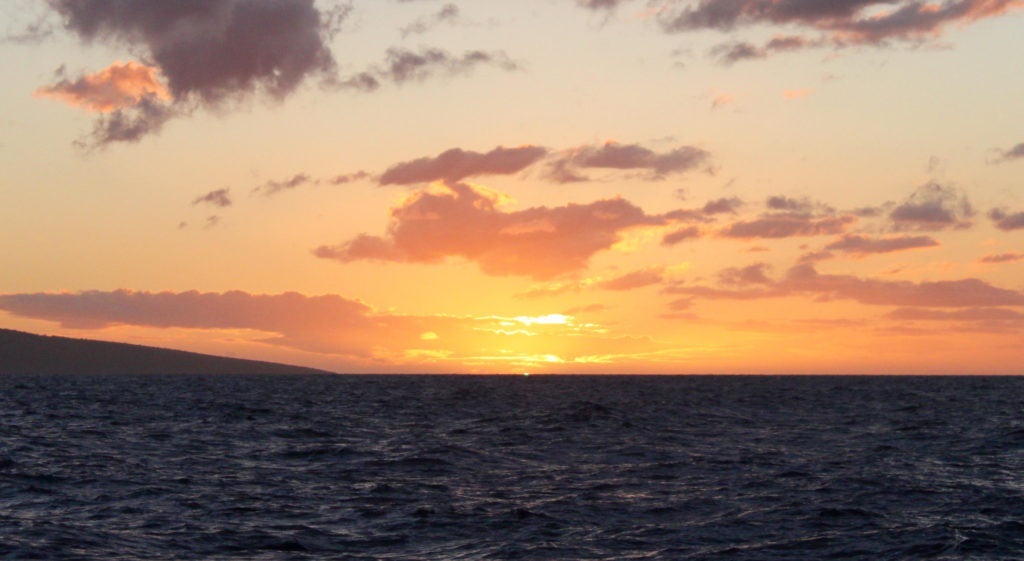